We’ve now used cameras on tripods, handheld, and on shoulder rigs.  This week, we’re going to play with some bigger toys to create camera movement that is – dare I say it – more cinematic.  Filmmakers like David Lynch use a static camera to create dramatic tension; filmmakers like Alfonso Cuaron use a handheld camera to create intimacy and engagement.  When a camera is mounted onto a track or moving platform, the result is somewhere in between, yet entirely unique.

As we previously discussed, moving the camera helps insert the audience into the scene, because a handheld camera approximates the way we actually see the world.  However, when a camera moves forward on a dolly or floats sideways on a slider, that is movement that we don’t usually experience in life.  It is deliberately artificial.  That’s not a negative thing – it’s simply using the artifice of film to its potential.    The smooth movement and the composition of the frame guide our eyes in an almost irresistible way.

Pushing in, pulling back, tracking from side to side – these are essential parts of the “classic Hollywood” style.  Sometimes this movement is utilitarian – following an actor, exploring the geography of the set, drawing the audience’s attention to part of the scene.  Few directors do this in a more deliberate, exacting way than David Fincher.  Fincher’s camera follows his subjects with mathematical precision.  These are motivated camera moves that lock the audience into the movement of the characters.  Check out this video essay from Nerdwriter for some insightful examples:

Other times, this movement is overtly stylistic. Spike Lee often uses shots where both the camera and the actor are moved through an environment on a dolly.  The result is floaty and dreamlike; it separates the actor from the world and creates a kind of collage.

If Spike Lee uses movement with style and David Fincher uses it with precision, Steven Spielberg uses camera movement with emotion.  Spielberg has always been a director who understands the emotional power of camera movement – and he isn’t afraid to use it.  Spielberg is often considered a “sentimental” filmmaker and I think that his camera movement is a big part of that.  In the following scene from Close Encounters of the Third Kind, the camera is almost constantly moving, highlighting the mounting fear and strangeness of the sequence.

However, the best examples of Spielberg’s style of movement are probably his shots of faces.  Spielberg understood the expressive power of the human face early in his career and his filmography is full of these shots.  Here’s an excellent video essay from Kevin B. Lee examining how Spielberg uses – and eventually subverts – a simple dolly move towards an actor’s face.

The dolly zoom is known by many names: the push/pull, the trombone shot, the Vertigo effect, and others. We’ve discussed how this effect is achieved a bit already: as the camera moves closer or further away from the subject, the lens zooms in or out in the opposite direction.  In the resulting shot, the subject stays roughly the same size, but the perspective of the background changes, creating an unsettling effect.  It can be used to emphasize isolation, build tension, or illustrate a sense of panic.  I’d argue that all three are happening in this famous shot from Jaws. 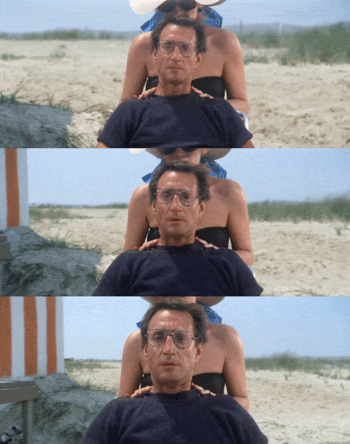 Dolly zooms are difficult to film – you need to move the camera and change the focal length of the lens smoothly and simultaneously.  If the camera drifts to one side or the other during the movement, the shot won’t work.  If the zoom goes in or out too far, or at the wrong speed, or unevenly, the shot won’t work.  You also have a limited amount of space and time to play with – it takes a large, complex setup to move a camera dramatically towards or away from an actor and you need a lens with a long zoom – remember, most cinema lenses are primes – to mirror it.  For these reasons, dolly zooms are usually only a few seconds long.